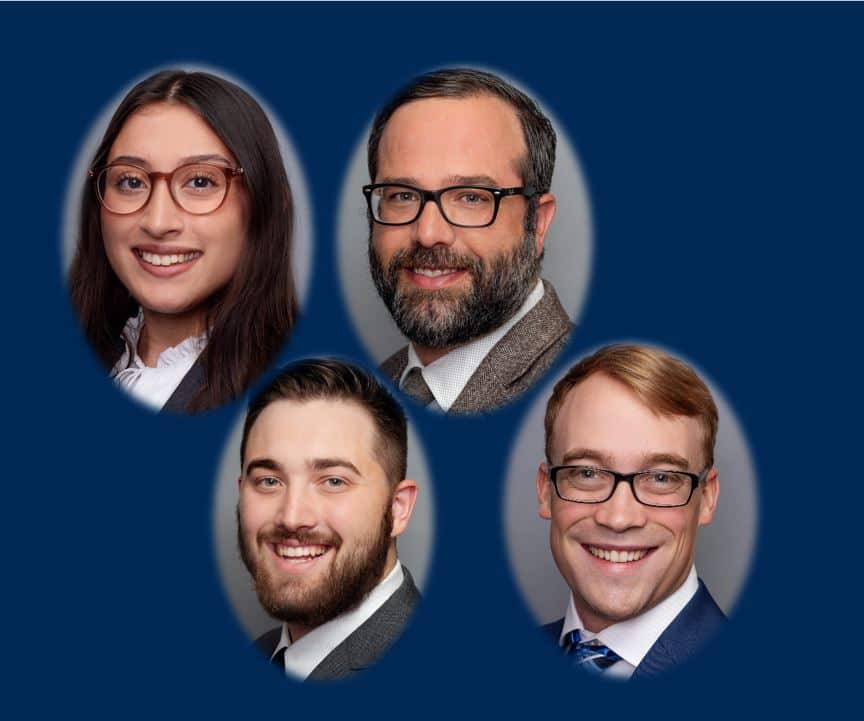 Wednesday, October 6, 2021 – LSWG is pleased to announce the addition of four new staff members who joined our growing ranks earlier this year.

Jocelyn Castillo has joined LSWG as a staff accountant in our Frederick office after graduating from Mount St. Mary’s University in May, where she earned a B.S. in accounting. At LSWG Jocelyn assists with tax preparation and audits for the firm’s individual, business, and nonprofit clients. A native of Frederick — and graduate of Governor Thomas Johnson High School — Jocelyn continues to reside in Frederick and enjoys spending her free time with her family — including her two dogs, Milo and Singo.

Ryan Dodd joined LSWG as an intern in the midst of the 2021 tax season. In June, he accepted a CAS staff accountant position in LSWG’s Frederick office where he assists with client accounting services and tax preparation for owner-managed businesses. Ryan came to LSWG with a background in teaching, most recently as an assistant professor at Gettysburg College.  He is a graduate of The Evergreen State College, in Olympia, Washington, where he earned a B.A. in economics and philosophy, and the University of Missouri-Kansas City, where he earned a Ph.D. in economics.  Originally from Milwaukee, Wisconsin, Ryan currently resides in Frederick, where he enjoys sharing his free time with his son, Elic.

Dakota Ellis joined LSWG as an intern this past summer.  At the conclusion of his internship, he accepted the staff accountant position in our Frederick office while continuing his studies. Dakota is a May 2022 candidate for a B.S. in accounting at Shepherd University. Prior to joining LSWG, Dakota had the pleasure of working in the fast food industry where he served as the training director and assistant director of the kitchen. At LSWG Dakota assists with tax preparation and audits of the firm’s individual, business, and nonprofit clients and is a member of the firm’s Employee Relations Committee. Born in Washington County and raised in West Virginia (a graduate of Spring Mills High School), Dakota currently resides in Shepherdstown.  He and his fiancée, Michala, are planning an October 2022 wedding.

Luke Reich has also joined our Frederick office where he is a staff accountant and assists with tax preparation and audits of the firm’s individual, business, and nonprofit clients.  No stranger to LSWG, Luke worked at LSWG as an intern during his 2016 senior year at Governor Thomas Johnson High School.  He then went off to Frederick Community College for two years, and then to Towson University, where he began an internship with a large regional firm in Baltimore. After earning a B.S. in accounting from Towson University, he continued to work for the Baltimore firm for a couple of years before returning to Frederick and LSWG.  A soccer and lacrosse player — with the busted knees to prove it — he played dodgeball while at Towson, where his team won the 2019 club dodgeball national championship. Luke is a lifelong resident of Frederick, where he continues to reside.